Final poster and the reflection

After I made two possible versions of the final poster, the only thing that was left that I had to do, was to decide for one. Even though I would have been fine with both, I decided for the one with the simpler heading. I did that because I did not want to draw any attention from the poster itself, as well as I thought that the design just made more sense and was less confusing (which I think is important for my target audience).

During its development, the poster went through a lot of changes. The basic design as well as the colour scheme ended up differently from what I had planned it to be. But I guess that is because I had never used Illustrator before and I just did not know what I could do with it. Even though the creation might have taken me longer then some others, I am quite happy with the result. My poster evolved from a pure sketch to something presentable, not just in theory but also reality. One of the most important parts of its development was getting feedback from my target audience. It’s always different to imagine how someone would respond to something and how they actually do it. The children made me see what changes the poster needed in order to make it more appropriate for them.

The most difficult part of it was to stick to vector graphics. The tracing of the trees took a lot of time and when I was trying to shape things certain ways, I often spend really long on understanding Illustrator’s tools. Sometimes, I would have liked to just take my Graphics tablet and draw stuff out. But I got used to it and it got easier to work in Illustrator. Looking back on the different techniques I used, the gradient one was the most difficult. I changed the gradients multiple times because I had to adapt to everything, for example changing sizes or shapes. The things we learned in our seminars helped me a lot and I got useful feedback from the tutors.

In general, I am happy with my result and the new developed skills in Adobe Illustrator. In the following, you can see the final poster.

Once again, I asked people for their feedback. This time, I asked my course mates since I had the feeling that the children could not really help me when it came to the heading. As long as there was one, they did not really care about how it looked like. They were more interested in the illustrations.

My course mates on the other hand gave me really useful feedback. One of them asked me if I had tried other versions of the heading and that he could imagine it would look nice if the colours were reverted. I tried that but I struggled when it came to removing the glow. It was an effect that I had added ages before and somehow the version of Illustrator on my laptop did not allow me to get rid of it. So I deleted the whole frame and redid it.

After I changed it, I was not too happy about the way it looked like. Because the heading was really bright, it distracted from the actual content of the poster. Also, I preferred the white font colour. I changed it back to white and deleted the filling (I just left a white frame). I did it in two different ways, so I could go back to my course mates and ask for their opinion. 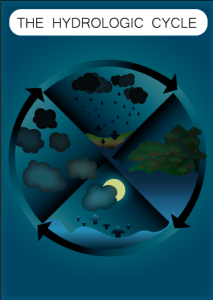 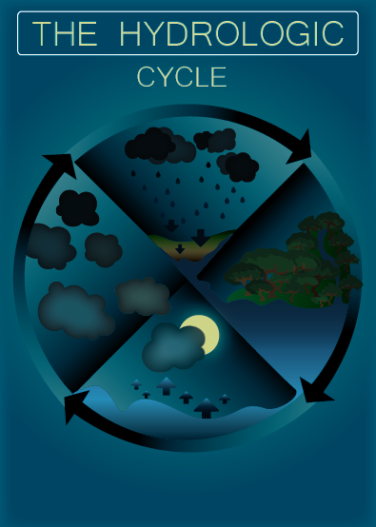 Note: By now, I have figured out how to remove the glow. Somehow the effect turned into its own illustration and I could just select and delete it. (Photo below)

Changing the background colour and arrows

After getting some feedback from friends and family members who were in my target group (younger children, age about 5-10), I decided to change the background colour to give my poster a less dark appearance. The children liked the colour pattern, but I found that it was hard for them to differentiate between different shapes and that parts did not stand out as much as they should. So, even though I personally liked the background colour, I did some experimenting to adapt the poster to its target audience.

In the end, I showed the children three different options. The first one was the original one with the dark gradient background. The second one was something very different. I had changed the background colour to a tone of grey. The third one was blue again. I had only changed the gradient from linear to radial and brightened the colours a bit. It was the one that the children picked in the end, even though they also liked the grey one.

Since I had already shown them my poster anyway, I also asked them what they liked best and if they could change something, what it would be. One of them said that arrows were missing, because it is supposed to be a cycle. The oldest one then pointed to my arrows and explained that they were there, just a bit small. That made me thinking. Obviously they were not as obvious as I thought. So, I went home, looked for some inspiration and tried it on my poster. I did not take more than one try until I was satisfied with the result. Also, I found three inspirational pictures of how I could do my arrows: 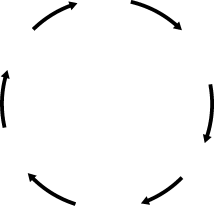 I moved the arrows outside of my circle but I did not want them to be seen a separate thing as well as I wanted the circular shape to still stand out most. I wanted there to be a clear outline, so the poster would not be seen as too crowded, that’s why I decided not to do them the way it was done in the first source picture. Because the fact that my new arrows were supposed to be caught by the eye right away, I ruled out the way the second picture did it. They would have been connected to the circle which might have looked nice, but defeated the goal of why I changed the arrows in the first place: The fact that I wanted to make it easier to see them. That is why I went with the third option. 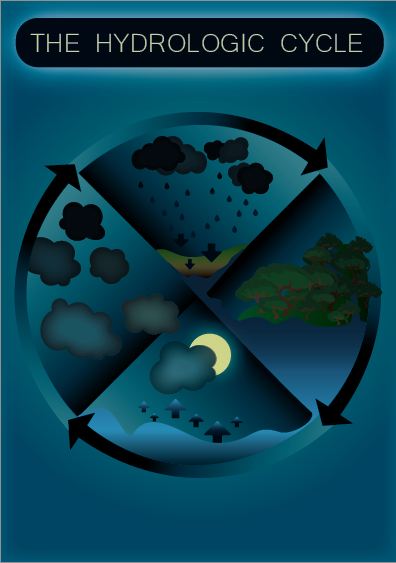